We left good ole Ferrum, VA around 10:00am this morning and arrived in Milan, OH at 9:10pm. We figured about nine of those hours we were actually on the road. That’s quite a haul for our three little fellows. Shannon and I were pretty worn out ourselves.

We traveled through three different states today. Virginia, West Virginia and Ohio. The latter two being new territory for the boys. We particularly enjoyed the drive in West Virginia on I-77 and I-64. Tree-filled mountains lined both sides of the road. Carter called them tree-mountains.

Being in the car with three young boys for nine hours can make for some interesting conversation. Here’s one of our favorites from today:

Carter: Daddy, are you stronger than a gorilla? (He was playing with a Donkey Kong figure)

Daddy: Nope, not even close!

Jackson: Daddy, are you strong than Thor? (He was playing with a Thor action figure)

Daddy: No, he’s way stronger than I am.

Carter: Daddy, can I see your arm muscles?

Daddy: (Pulling up my sleeve and flexing for all I’m worth)

Carter: I don’t see any muscles!!

From West Virginia we crossed the Ohio River and began our trek through the Buckeye State. Shannon found the world’s largest basket of apples in Frazeysburg, Ohio and naturally we had to stop by. It was pretty large. I believe 20 feet tall. 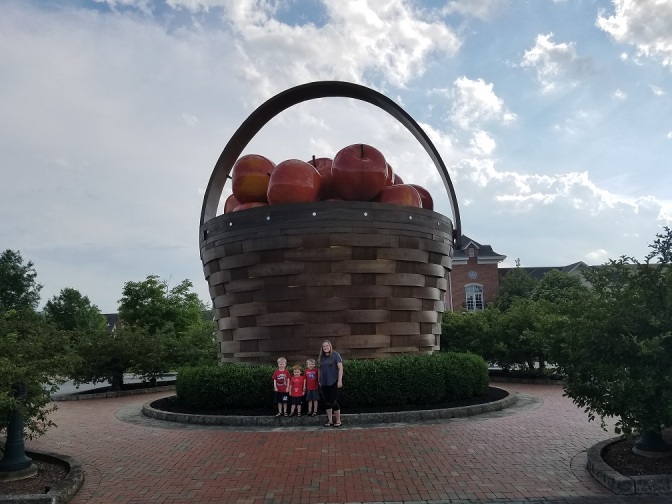 The area surrounding the apple basket was neat as well. It’s at the Longaberger Homestead. We were there after hours and were practically the only ones there. It worked out nicely though because the boys had a chance to get some energy out running around the basket.

From the apple basket it was a 2 hour drive to our hotel in Milan, Ohio. Fun fact about Milan; it is the birthplace of some guy named Thomas Edison. We might go check his home out tomorrow.

Tomorrow’s time on the road will be half of what it was today. This is good news for Carter, who earlier today announced, “I think I’m sitting in this car seat all day!”.

14 thoughts on “Day One In The Books”