The drive from Van Buren State Park (SP) to Muskegon SP was around two hours. We took our time on the drive and traveled through some neat harbor towns as it was nap time. Saugatuck was our favorite.

We didn’t get to stop but the main street area was lined with all kinds of unique shops and restaurants right on the water.

We constantly find ourselves saying we could easily have spent the whole trip just in Michigan. There is so much to see!

After arriving at Muskegon SP we quickly realized privacy wasn’t something we were going to have. There were trees all around but they were all tall trees with no low hanging branches.

After setting up our campsite we took the boys to swim in Lake Michigan. Whereas last time the water was calm with virtually no waves, this time all three boys got wiped out by at least one wave. Everett couldn’t stand in the water by himself because of the waves. Regardless, the boys still had a blast.

We ended up spending most of our time making little day trips to neighboring towns. Grand Haven, Michigan was probably our favorite.

We took the boys to Heritage Landing in Muskegon where they got to spend some time on another playground. No surprise there!!

We knew there was a chance for some bad weather that night so we did our best to prepare. I got a severe thunderstorm warning alert on my phone around 1:45am. It was a rough next hour and half with thunder, lightning, pouring rain and two little boys in the bed with us.

Everett slept through the whole thing!!

The next morning we got up early and spent some more time in Grand Haven. I had read the Harbor Trolley was a neat thing to do. Jackson was a little scared at first but ended up enjoying himself. We all did! 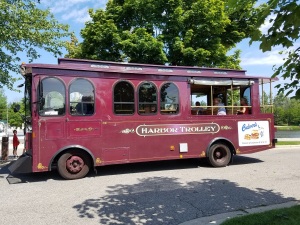 The tour guide drove us around the town and shared some interesting stories about the town’s history. It lasted about 45 minutes. Any longer and I think the boys would’ve jumped ship….or trolley! For the five of us it was just three dollars.

As a side note, we were very lucky to have missed the worst of the storm the previous night. During our trolley ride we saw large trees down everywhere in Grand Haven. Our tour guide, who was reciting a memorized script during the tour, made several comments about the damage.

Large trees falling and sleeping in a tent don’t go well together. We felt very blessed!

We let the boys talk us into playing putt-putt. There was a little course right beside where we boarded the trolley. For the three of them to play it was six dollars. We felt pretty good about the entertainment value for those two activities. 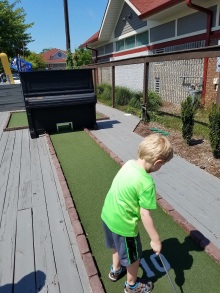 The boys were tired and after a quick lunch they took naps in the car on the way back to the campsite.

This time we made a more conscious effort to get things in order the night before checking out. This helped us feel much more prepared about “pulling up stakes” (as any good camper would say) the following day.

We ate dinner at the campsite and headed back to Grand Haven for the evening. We did some shopping on Washington Avenue (the hippest place in town) and then walked through Escanaba Park out to the lighthouse.

Unfortunately the walkway leading to the lighthouse is undergoing some construction but we still went out as far as they would allow.

They must have a thing for red lighthouses in Michigan!

Some ominous rain clouds cut our time at the lighthouse short. I ran what felt like a half-marathon back to the car and picked up Shannon and the boys just before it started raining. Needless to say my soccer days are far behind me!!

Our extra preparation work really paid off as we checked out the following morning around 11:26am. For those keeping track at home that’s a whopping four minutes earlier than last time!!

In our defense, everything being wet made packing up much more challenging. Next time will be better for sure…..we hope!

For now it’s off to Sleeping Bear Dunes National Lakeshore and then to our next campsite, Hoeft State Park on Lake Huron.