After checking out of our hotel we made a couple stops in the Minneapolis area before hitting the road.

We ate a picnic lunch at Hyland Lake Park Reserve and then let the boys play on the very impressive playground. They were a bit overwhelmed at first but were running, climbing and playing by the end.

Being the football fan that I am, we couldn’t drive through Minneapolis without seeing the Minnesota Vikings stadium. It’s one of the newer stadiums in the NFL and is an impressive looking structure!

It was a two and half hour drive from Minneapolis to our hotel in Wausau, WI. This was a planned, low-key day so we didn’t really have anything else on the agenda.

We decided to take the boys bowling! They had never been bowling before so this was another first for them. They loved it! 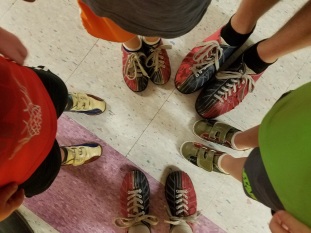 Carter and Jackson both got a strike and were very proud of their accomplishment!

There were a few times where we didn’t know if Everett’s ball was going to make it to the pins. I’m pretty sure the pins knocked his ball over a couple times! When he let me, I would give his ball an extra shove down the lane to speed things up.

After finishing, we asked the boys to show us their best bowling pose! 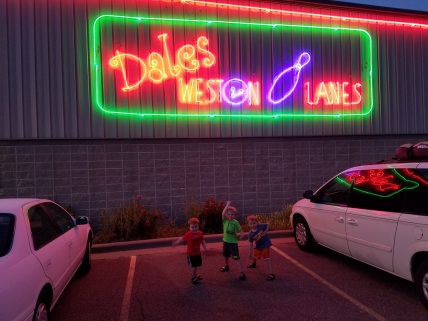 That night, at our hotel, we could see a fireworks show off in the distance. After the show we were done for the night.

The following morning we continued east and made the two hour drive to the campground at High Cliff State Park on Lake Winnebago. We were anxious to find out what our campsite looked like as we would be spending three nights there.

We were pleasantly surprised to find a spacious and private site! 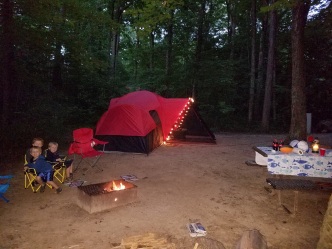 The back-to-back laid back travel days were nice and we had plenty of time to make a campfire after getting our things unpacked. Maybe we’re getting better at this camping thing!

High Cliff State Park is less than an hour drive from Green Bay. Being the football fan that I am, we had to go see Lambeau field. Does any of this sound familiar?

Actually, we ordered tickets a month back to go on a tour of the stadium. Once again the boys got in for free!!

Our tour took us to a suite on the 6th floor of the stadium. The tour guide said these suites are leased yearly for around $160,000. We learned some neat things about the stadium and also some Packer history. The boys didn’t seem to care as much about things like where the announcers sit while calling the games. 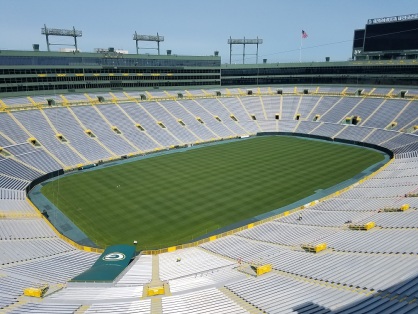 From the suite we went down to field level and they took us through the tunnel where the Packers run onto the field.

For the record, I am a Cowboys fan. I don’t want anyone getting the wrong idea!

It was still very impressive walking through the tunnel and onto Lambeau field. I can definitely appreciate the history and the fact that guys like Brett Favre, Aaron Rodgers, Bart Star and Reggie White have all made that very same walk.

Unfortunately they wouldn’t let any of us do the Lambeau Leap due to liability. Apparently, someone did it one time and got injured. This is as close as I could get.

If you don’t watch football you likely have no idea what a Lambeau Leap is. Essentially, it’s a Packer player leaping into the stands after scoring a touchdown.

The worst part of the tour is that now the boys are trying to say they are Packer fans. What have we done?! I predict a tour of the Dallas Cowboys stadium in our very near future!!

From Green Bay we drove to the southern tip of Winnebago and spent some time in Fond Du Lac, Wisconsin.

We went to the Fondy Sports Park to play putt-putt. 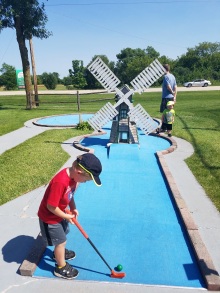 Then we spent some time at Lake Side Park for a few other activities. It’s neat to see the boys getting past some of their fears and trying new things. At Sesame place, last summer, Jackson wanted nothing to do with the merry-go-round. At Lakeside Park he wanted to ride it more than once! 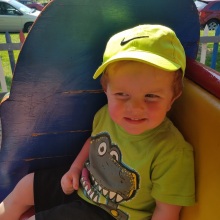 We also rode a little train that took us around the park. 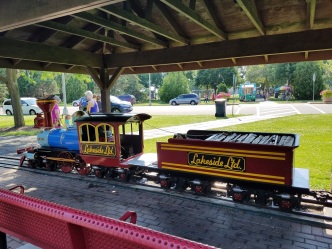 After eating some locally-made, Wisconsin ice cream we drove to the lighthouse. The boys were tuckered out (and so were we) so we headed back to our campsite for the night.