Going into Wednesday night, we knew the forecast was calling for some light rain during the night and most of tomorrow. We woke up to discover a fine mist covering everything. We had been extremely fortunate up to this point and had not experienced any adverse weather. The high winds hadn’t really affected us as much as we thought they might.

Things being damp slowed our packing process but we tried our best not to let it dampen our spirits.

This was the day we were leaving the country. We wouldn’t set foot on American soil for another five days. Before crossing the border we had one last stop: West Quoddy Head Lighthouse, the easternmost point in the United States.

It was windy, misty, cold and awesome!!!

It was now time for Canada!!

We plugged in the address for our hotel in Moncton, New Brunswick and waited for the GPS to plot out our course.

And waited some more. The GPS never made it passed calculating 75%.

“Just use the GPS on your phone”, you might say.

Here’s the tricky part. Our phones were already pulling off of Canadian cell towers. I spoke with US Cellular before leaving for this trip and found out their international data rates are sky high. Our plan was to really not use our data unless absolutely necessary.

I had downloaded some maps on google but not enough to cover the areas we needed to travel today.

We were able to use our GPS to get us to the USA/Canadian border. The boys were very excited to go into Canada. Their only complaint was, they wanted the bridge between the two countries to be much bigger.

Crossing into New Brunswick also sends you into the future. We will be in the Atlantic Time Zone, which is 1 hour ahead of Eastern Time, until we make it back to the USA.

Now that we were fully into Canada we decided to try the GPS again. Maybe it just didn’t like calculating across country borders.

We plug the address in again and BINGO, it loads. Everything is great, right?

The GPS doesn’t know where we are and the roads on the GPS don’t match the actual roads. We end up pulling over and I mapped out a path to get us near the hotel.

As we got closer to Moncton, the map I had downloaded on my phone kicked in and we made it safely to our hotel.

It was laundry night. Here’s what laundry night looks like in a hotel because none of Shannon’s clothes can be put in the dryer.

A couple thoughts about traveling in Canada.

Seeing a speed limit sign that says 110 is definitely strange. Of course it means kilometers per hour not miles per hour.

Trying to figure out how much we are actually paying for gas is complicated. They give you the price based on the liter instead of the gallon. Also, there is an exchange rate between American and Canadian money. Right now every 1 Canadian dollar is worth 77 cents in American money. Filling up for the first time will be interesting.

The lady at the hotel said tomorrow’s weather was going to be much better than today’s. It was going to be 22 degrees. I flat out said, “I really have no idea what that feels like.” She said it was pretty warm and I’m going to take her word for it.

I have a feeling our time in Canada is going to be interesting.

We woke up to beautiful weather. The sun was shining and it had to be every bit of 18 degrees out. That’s just fun to say.

We drove 45 minutes south of Moncton to Hopewell Rocks on the Bay of Fundy, which is also fun to say.

If you spend any amount of time researching things to do in New Brunswick, the name Hopewell Rocks comes up everywhere you look.

The Bay of Fundy is home to the highest tides in the world. The water rises around 45 feet during the tide cycle. We were literally able to watch the tide come in.

Here’s a picture from the highest observation deck:

Here we are standing on the bottom of the Bay of Fundy.

These next two pictures were taken 31 minutes apart. You can see the water is starting to cover the yellow sign Shannon and the boys were standing next to. 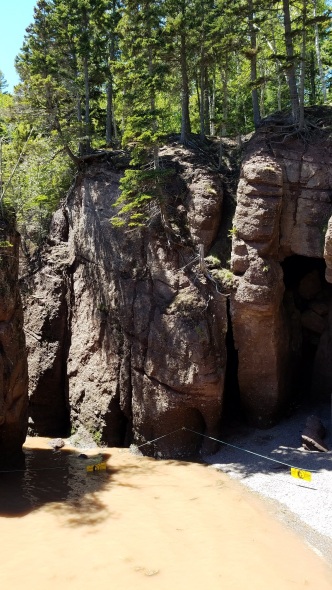 Here’s a ground level video that might give you a better idea of the scale of these rocks: Hopewell Rocks

To be such a highly publicized place to visit, we thought the fees to get in were very reasonable. For our whole family to get in and use the “shuttle” (golf cart) to get to the main area it was around $33.

While buckling the boys into their car seats, we asked them what their favorite part of Hopewell Rocks was. All three of them said the golf cart ride. Were we surprised by their answer? Not one bit.

Next up on the agenda was a trip to good ole Prince Edward Island (PEI). A place where your wildest dreams come true. I’m not sure anyone actually says that but I do know Shannon has always wanted to go to Green Gables. So, there’s one dream that came true.

In order to actually get to PEI you have to cross the 8-mile-long Confederation Bridge. It offers scenic views as you cross the Northumberland Strait and also offers you a chance to pay a $47 toll when you have to go back into New Brunswick!!!

Green Gables is located in the central portion of the province and you mostly drive through rural farmland to get there. The park grounds seem to be undergoing a massive renovation, which made the entrance less attractive but once inside the park you are transported back to the time of…………..Anne, I guess.

I will be the first to admit, I’ve never read any of the books or watched any of the movies. I still found the area to be well put together and worth the trip. I believe I can speak for Shannon in saying that our trip to Green Gables was well worth the drive!! 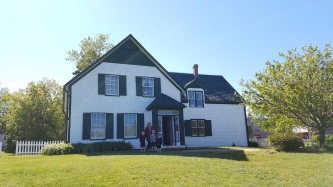 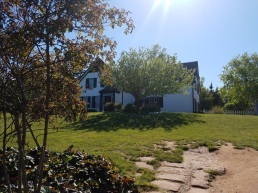 Green Gables is actually located inside a portion of Prince Edward Island National Park. I had heard about the Cavendish Cliffs (red cliffs near the ocean) so we took a short drive through some of the coastal regions of the park to find them. Once again PEI did not disappoint.

This being our last main stop for the day, it was time to head towards our hotel in Nova Scotia. We have a big day of sightseeing planned for tomorrow that includes the Cape Breton Highlands National Park.