We set off from Hoeft State Park!

A modest 3 hour and 40 minute trip. It could have been shorter but I had read some neat things about a scenic drive called the “Tunnel of Trees” between the towns of Harbor Springs and Cross Village along the shore of Lake Michigan.

We felt like the added time was well worth it!

One of the first things people asked us, after hearing we were going to Michigan, was “Are you guys going to Mackinac Island?”

We didn’t have time to ride the ferry to Mackinac Island but we did spend some time in Mackinaw City. It’s a cute town right on the water with all the usual touristy shops. We had lunch at the Pizza Palace and stopped in for some chocolate covered goodies at a fudge shop.

Next we crossed the “Mighty Mac” and continued our journey into Michigan’s Upper Peninsula.

The Upper Peninsula, or the UP, is a land full of evergreen trees, snowmobiles, insanely aggressive biting flies, torrential downpours and moose.

Actually, after talking with some of the locals, moose sightings are very rare. A lady working in the Newberry (the official moose capital of Michigan) Dollar General said she had lived there her whole life and never seen one.

When talking with some of our camping neighbors about staying at Tahquamenon Falls State Park they said one of two things. “It’s so beautiful up there” or “You’re going to need some bug spray.”

We found both of those statements to be true.

We stayed at the Lower Falls Campground. There is an Upper and Lower falls at the park.

We definitely spent less time at this campsite than the others we have stayed at so far. In part because there were several things we wanted to see in the area and also because of the BUGS!!

They were just as advertised!

Our worst experience with the evil creatures was at Whitefish Point. It’s a neat area at the tip of one of Michigan’s peninsulas. Our plan was to see the lighthouse and let the boys get their feet wet in Lake Superior. 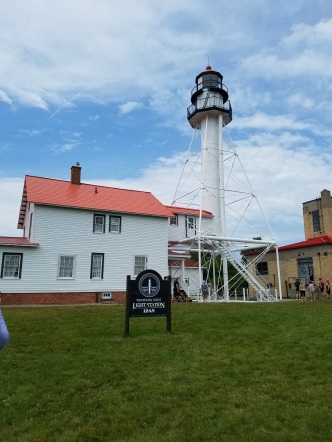 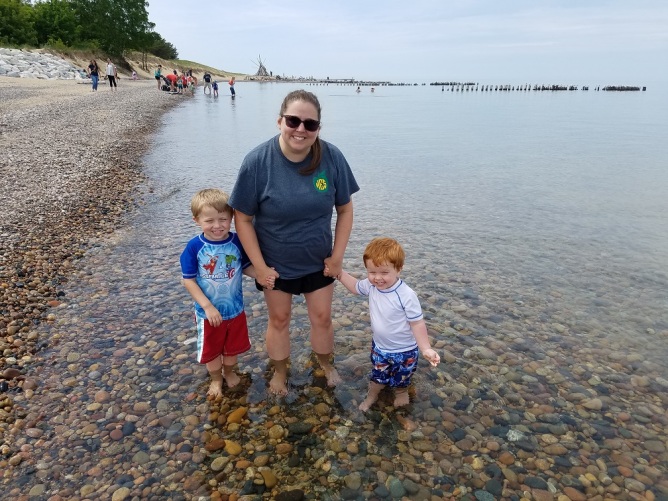 The mutant flies had other ideas.

Shannon counted twelve flies on her legs at one time. TWELVE!!!

We lasted about ten minutes before heading back to the car.

The main feature of the Tahquamenon Falls State Park is the falls. Lucky for us both are accessible via paved or boarded walkways.

On the day we visited, one of the park rangers said that due to the amount of rain the area had received this was a good time to see the falls. I knew going in the Upper falls were the bigger of the two so I wasn’t sure what to expect from the Lower falls. 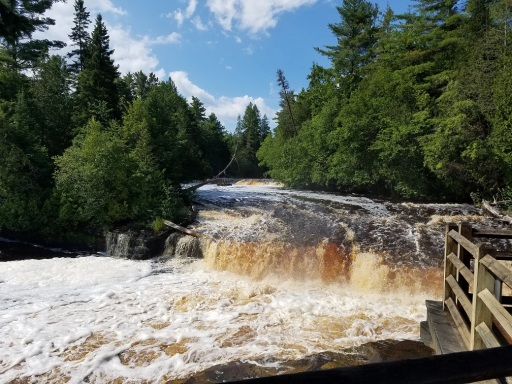 We were all very impressed. The boys enjoyed being able to ride in their strollers for the mile long loop walk to the falls.

The Upper falls were a short four mile drive down the road. We decided against the strollers this time because we had been told it was just a quarter mile walk to the falls this time.

There were several different overlooks with views of the falls. We were glad we left the strollers in the car because getting down to the viewing platform right beside the falls required going down 94 steps.

Carter and Jackson handled the steps fine and Everett enjoyed getting carried down. Shannon and I found the 94 steps……..how would you say it………less enjoyable.

The Upper falls were incredible. The brownish-orange water color was intriguing. I’ve seen other videos of the falls and the water is always that color. 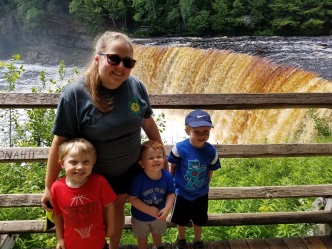 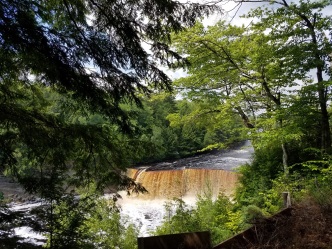 Being the math wiz that I am, I calculated that there would also be 94 steps going back up. Those were even less enjoyable than the first 94 steps.

In the evening we drove down to Sault (pronounced Soo) Ste. Marie to watch the ships coming through the locks. The officer on duty told us the current ship in the locks was the Paul R. Tregurtha, the largest ship in the Great Lakes. After a quick google search I found out it is 1,013 feet long. For some perspective, the Titanic was 883 feet long.

Sault Ste. Marie is yet another neat town right on the US – Canadian border. One of the boys’ favorite things we saw was the bridge leading to Canada.

Traveling so much for the day had left us feeling unorganized and unprepared for packing things up the following day. We did our best to organize the tent and get things ready.

It started raining just as we were heading into the tent for the night. We knew that would make things more complicated in the morning but were hoping the showers wouldn’t last long.

Morning came and all was good. Things outside were a little damp but that wasn’t going to be a major problem. By 9:00am it seemed like we were ahead of schedule.

At 9:15am the heavens opened. For 45 minutes we packed the van and took down the tent in the pouring rain. My favorite thing about the experience was that we just laughed our way through it. It really was kind of comical.

Needless to say, everything in our luggage carrier (the tent, the tarps and our chairs) are soaked. But hey, look on the bright side, we left the campground at 10:00am which beat our record by 30 minutes. Sure, I had to wring out my shirt and Shannon had to change her entire outfit but we’re still setting records!!

We have never been more thankful to stay at a hotel than we are tonight!!