After spending the night in Commerce, we made our way to the Georgia Aquarium in Atlanta. Our goal was to arrive when the doors opened. The one thing we didn’t consider was the Atlanta traffic, which set us back about 20 minutes. No biggie!!

The Aquarium is located right next to the Coca-Cola museum (which we have heard good things about) and the Centennial Olympic Park. In other words, it’s pretty much right in downtown Atlanta. Here’s a look at the outside.

Before I go any further, I would like to say that my expectations for this aquarium were very high. My mind had set the bar so high that I wasn’t sure it could be reached.

We found a parking spot in the garage and made our way towards the entrance. After working through a couple discount issues at the ticket window, we were good to go!

We are North Carolina Aquarium members, which gives us a discount and we had to work through that with the employee behind the counter. That could have been a much longer story but I wanted to save you the time of having to read it all. I realize now that by explaining how it could have been a longer story, I have actually wasted the same amount of time as if I had actually told the story.

Walking into the main area of the aquarium is quite the experience. It takes a minute or two to take it all in.

We were all excited to see the whale sharks. We’ve been to many aquariums but have never seen a whale shark. We know there are only a few aquariums in the world that have them. We headed over to the Ocean Voyager exhibit and immediately found ourselves walking underneath the whale shark tank.

I will say, walking through the tunnel is a neat experience but it doesn’t make for very good pictures. I guess, due to the thickness and curvature of the glass, everything looks a little distorted.

After making it through the tunnel and past a few other tanks, we arrived at the main observation area for the whale shark tank. We could have camped out there for the day. 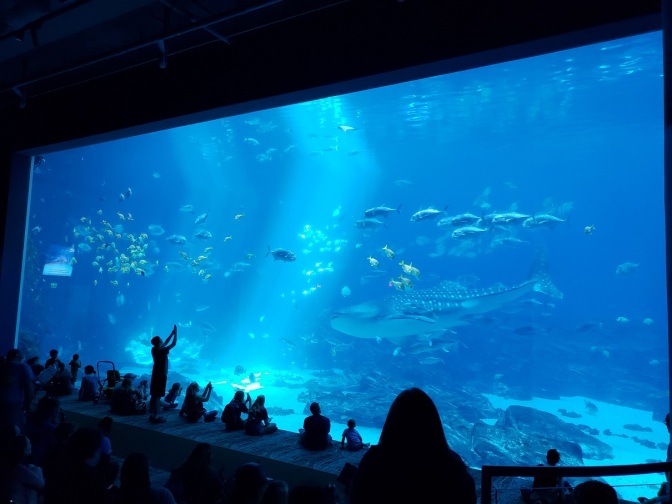 The manta rays in this tank were also a sight to behold. If I remember correctly, the largest was around 13 feet across. Truly massive!!!

They have whale shark talks throughout the day. We learned all kinds of neat information about the tank and the animals. For example:

After prying ourselves away from the massive tank we stumbled upon the penguin walk out in the main area.

The crowds were already starting to make their way to the dolphin coast for the upcoming Dolphin show. We decided to join them. They encourage you to line up 30 minutes prior to the show starting but many go before that.

Unfortunately they don’t allow any photos or videos during the show. We did take a couple pictures before the show started.

The show is housed in a massive 1,800 seat arena. The first 10 rows are considered the “Splash Zone”. We sat in the 10th row and none of us go wet. It looked like the people in the first five rows were the ones who got soaked.

The show was INCREDIBLE!!! It only lasted for 15 to 20 minutes but we all enjoyed every minute of it. The boys loved seeing how high the dolphins could jump out of the water. This is something you have to do when you visit the aquarium.

After the show we decided to eat lunch. We were able to find a spot to eat where we could watch the beluga whale’s swimming and playing,.

We were able to visit some of the other sections of the aquarium before going to another show.

The other big show at the Georgia Aquarium is the Sea Lion Show. Again, we couldn’t take pictures or record videos but here’s what the stage looked like.

This was a much smaller arena and the show didn’t seem to last quite as long. It was still an enjoyable experience. The boys liked hearing the sounds made by the sea lions and watching how fast they could swim.

Before leaving, we decided to visit the Ocean Voyager section again to see the whale sharks one last time.

Overall, this was an incredible experience and definitely worth the price of admission. If you are an aquarium lover, this should be on your bucket list.

I also put together a detailed review of our time at the aquarium on our youtube channel. Here is the link: Georgia Aquarium Review