Let me be clear. Pack-up days are never fun. Pack-up days when everything is wet are even less fun. The only positive thing about the situation was the rain had stopped. At least we could dry things off and pack them up. However, that means everything takes longer. We eventually made it out of the campground by 11:25am.

With very little on the agenda today we could afford a later start. There were only a couple hours between our campsites in New Hampshire and Vermont. We did stop and take a quick picture of Indian Rock before heading out of town.

While New Hampshire greeted us with blue skies and abundant sunshine, Vermont said hello with drizzling rain and low cloud cover. Unfortunately that is pretty much the forecast for the duration of our time here.

After the two hour drive, we arrived at our home for the next two nights, Brewster River Family Campground in Jeffersonville, VT. We picked this campground mainly for its’ convenient location to the town of Stowe and Smuggler’s Notch areas.

Upon arriving, we could immediately tell this was going to be a more rustic/primitive camping experience. They didn’t accept credit cards for payments and used a handmade wooden map of the campground to show us how to get to our campsite. Unlike our previous campground, where we had to pay 25 cents for five minutes in the shower, hot showers are free of charge!

I will say, our campsite has good privacy and provides a river view similar to our last site.

After setting up our tent, we made the 30 minute drive to the cute town of Stowe, Vermont. The drive took us through Smuggler’s Notch which included hair pin turns, boulders on either side of the road and a 16% grade at times. The low-hanging clouds masked the peaks of the surrounding mountains. We’re hoping for at least a short break in the poor weather so we can experience that drive under clear skies. Fingers crossed!!

In both New Hampshire and Vermont there are ski-resorts everywhere you look. All I can say is, they must be training Olympic athletes up here because most of these slopes look terrifying. Yikes!

We are officially at the end of our third week on this trip and I wanted to offer a few thoughts of reflection about this trip and just traveling in general.

In a way, it’s hard to believe three weeks have come and gone. However, when we start to think back about some of the things we did at the beginning of this trip (Gillette Castle, Rehoboth Beach, etc.), it feels like every bit of three weeks if not more.

This is particularly true when our schedule for the day has interrupted the boys’ naptime. When the boys get fussy and our patience wears thin, we find ourselves slipping into some sort of emotional black hole where everything that is good and true disappears and all that’s left is the bitter cold of absolute darkness.

Wow, talk about a flare for the dramatic.

I will say this. It’s fairly easy to find ourselves in grumpy moods and questioning why we ever thought five weeks on the road was a good idea. That doesn’t happen every day, but it does happen.

Traveling with young kids isn’t easy, but it can be done and it is possible to still like each other at the end of the day. Although, that doesn’t happen every day either!

We had several activities to choose from when deciding how to spend our only full day in Vermont. The bad news was that the weather didn’t exactly seem to be cooperating. It was more of the same from yesterday. For once, the weather people got it right.

We decided to go with a couple indoor activities to start the day with the hope that the skies would clear during the afternoon.

Our first stop was a tour of the Ben and Jerry’s factory in Waterbury, Vermont. 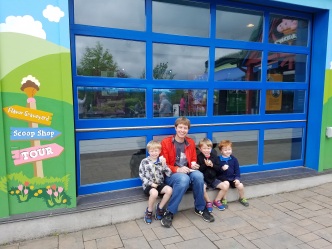 The tour lasted 30 minutes with the highlight being a sample of their Triple Caramel Chunk ice cream. I must say, the sample size was very generous. Everett proceeded to dump his in the floor within the first 15 seconds and they graciously gave him another one.

However, I wouldn’t really say the tour was geared towards young kids. They played a video at the beginning, we saw them making chocolate chip cookie dough ice cream in the factory and then we got our sample. Nothing interactive to keep the little ones intrigued.

They also have a flavor graveyard where tombstones represent different flavors that are no longer in production. We chose not to visit the graveyard because Jackson had succumb to the “Fall Down and Get Hurt Syndrome” and we felt it best to just get back in the car.

With the weather outside still less than desirable, we chose to visit the Vermont Teddy Bear Factory. This was another 30 minute long tour and was definitely created with young kids in mind.  Unfortunately, because we were there on a Sunday, there wasn’t anyone actually making the bears.

Our tour guide took us through each station and provided information about how the bears are made, throwing in corny bear jokes along the way. The boys could bearly contain their excitement!! 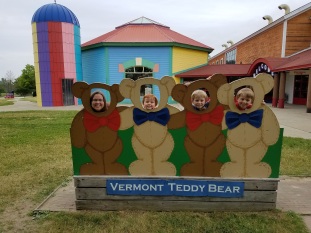 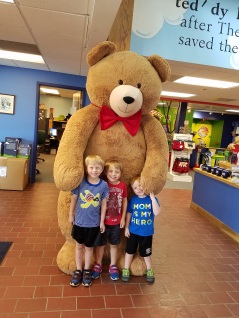 By this point in the day the rain had subsided. We decided to visit Moss Glen Falls in Stowe, Vermont. The reviews had said it was just a short walk to falls. After visiting the falls, we determined whomever wrote those reviews either has no perception of distance or was just straight up lying to everyone.

Maybe they are just used to hiking for extended periods of time, similar to what is required when climbing Mount Everest. I guess it wasn’t actually all that long, but it was fairly challenging for our kiddos and us as well. I may be alone with this thought, but I felt like the view at the end was worth the challenge of the hike. 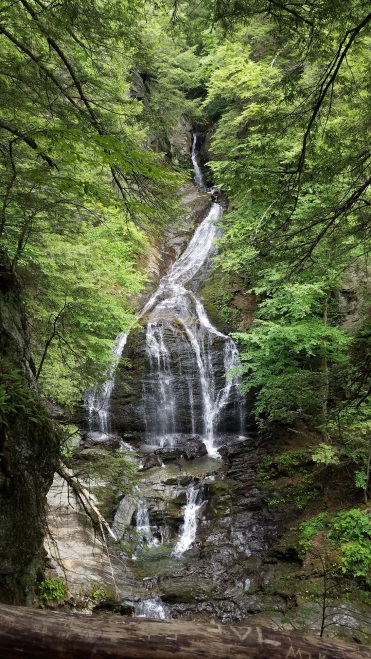 I feel like the picture doesn’t quite show how tall this waterfall was. Here’s a video: Moss Glen Falls

With daylight fading, we decided to call it a day and head back to our campsite. Due to the poor weather during our time here, I don’t feel like Vermont got a fair shake when compared to New Hampshire and Maine. Here’s to hoping the forecasted rain for tonight finds somewhere else to fall.

Another morning of packing up things around the campsite and unfortunately, another morning where everything is wet. Luckily the rain had stopped, but it was still a matter of trying to get things dry enough to pack up. In the end, everything being wet probably added about 1 hour to our pack-up time.

It was a two hour commute from our campsite in Vermont to our hotel in Plattsburgh, New York. We had researched a few possible stops along the way but ended up only stopping at one of them. Tonight was laundry night. We wanted to give ourselves plenty of time so we tried to minimalize our number of stops.

We traveled through Smuggler’s Notch one more time on our way out of the area. 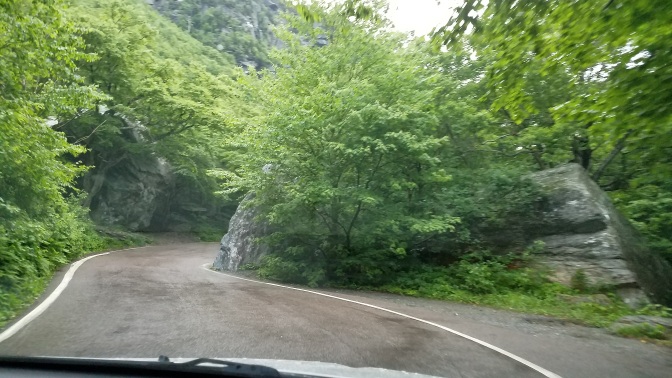 With the improvement in the weather, we decided to take a video of the drive. Sorry about the glare off the windshield.

We ended up stopping at White’s Beach in South Hero, Vermont. It’s right on Lake Champlain and gave the boys an opportunity to throw rocks in the water. I’m fairly confident they would choose throwing rocks in the water over almost every other activity we could offer.

This is also an interesting area because of all the colorful birdhouses. There must be hundreds of them around the park.

Randomly enough, there are also three dinosaurs lurking between the tall grass and trees.

On the way to Plattsburgh we came within 10 miles of Quebec. We kind of regret not planning to do something in Quebec since we had visited so many other Canadian provinces on this trip. I guess we’ll just have to make another trip up this way.

Crossing over Lake Champlain took us into New York. If you remember from earlier in our trip, we unexpectedly spent a short amount of time in New York thanks to a series of extremely unfortunate events. We’re hoping New York will treat us better this time around.

We had a low key evening of dinner at the hotel, swimming pool time and laundry.

That’s a good one!

Dinner and swimming pool time were great. Laundry time pretty much turned into a disaster. I know you don’t want to hear all the details because, well, it’s laundry. In short, the drier at the hotel didn’t really dry clothes. $1.50 bought you 15 minutes of your clothes being tossed around. I ended up going to a local laundromat and finished up the laundry in about an hour.

We’re excited to see what upstate New York has in store for us over the next few days.

2 thoughts on “Raining On Our Parade”