We ended up asking for a late check-out to give ourselves time to finish up last night’s laundry. With our shortest traveling day of the entire trip in front of us, we could afford to take the extra time.

We made great time on our 17 minute trip from our hotel to the campground. Our next three nights would be spent at Macomb Reservation State Park, in the far reaches of northeastern New York.

Our campsite ended up being right next to the playground, which allowed the boys ample opportunity to take advantage of it.

After getting the preliminary things done around the campsite, we hit the road to give the boys a chance to nap. We decided to make the drive down to Lake Placid. It’s about an hour drive from Macomb.

It was a beautiful drive through the Adirondack Mountains. The boys enjoyed seeing Whiteface Mountain.

Lake Placid is a neat, adventurer’s town with a nice main street area perfect for walking and window shopping. We took notes of a couple stores and places we wanted to visit in the coming days.

We made it back to our campsite for dinner and smores. We turned in for the night, thinking about what tomorrow might have in store.

A light rain fell overnight, which prompted me to check the weather forecast for the next two days. A couple days ago it was calling for rain tomorrow afternoon. Now the forecast was for rain to develop this afternoon, through tonight and into tomorrow as well. Bummer!!

With a full day of sightseeing ahead of us, we made every effort to get on the road early. A “low tire pressure” alert slowed us down a bit, but after sorting that out, off we went.

After seeing how neat Lake Placid was yesterday, we made the decision to spend the majority of our time in that area over the next two days. Our two main objectives were to walk the streets and visit some of the Olympic facilities.

We started out by walking down Main Street and visiting some of the shops. It was easy to find myself imagining what this place must have been like back in 1980 during the Winter Olympics. Lake Placid also held the Winter Olympics in 1932, but my mind can only imagine so far back.

We decided to forego all of the tempting restaurants with their good-smelling foods and ate scrumptious peanut butter and jelly sandwiches in the car. After lunch it was time to see some Olympic stuff!!!

Our first stop was the Lake Placid Olympic Museum, which was housed in the same building as the ice skating rinks. We had intended to purchase the Olympic Sites Passport (discounted admission to all Olympic facilities). However, the lady at the front desk informed us the gondola ride wouldn’t be operating until Friday (which is after we leave).

We opted for the pay-as-you-go approach. We all thoroughly enjoyed the museum. It was neat to learn about the history of the games held in Lake Placid and to see some of the memorabilia. 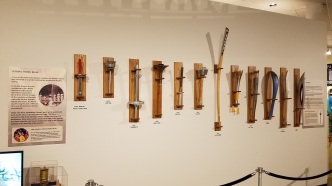 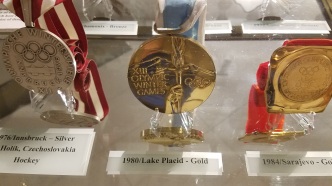 Here are the boys watching a replay of the Miracle on Ice!!

Here’s one of Shannon writing down our favorite winter sport.

For some reason no one had listed curling as their favorite sport. We made sure to include it so no one gets offended. Also, we’ve determined curling is the only Winter Olympic sport we could try without suffering life-threatening injuries.

I was talking with one of the gentleman working at the museum and he told us he was here during the Olympics in 1980. He actually watched the USA beat the Soviet Union in what everyone now calls the Miracle on Ice. He said the arena was one floor up from where we were. We rode the elevator up one floor and sure enough, there it was. 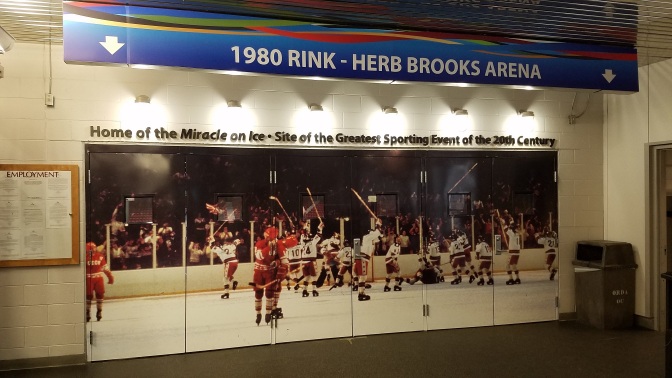 What a cool feeling (figuratively and literally) to be in a place where one of the most memorable sporting events took place.

We even discovered that one of our distant relatives was on the gold-medal-winning USA side. 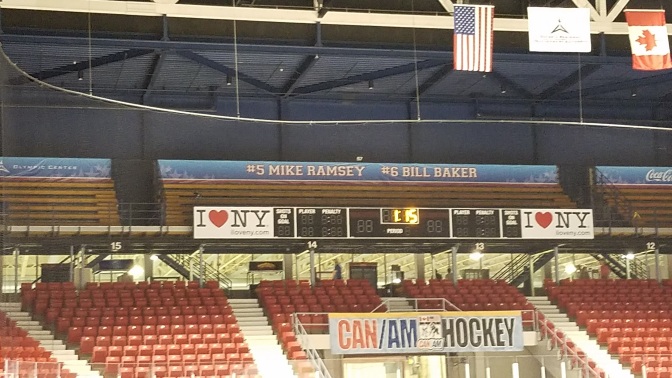 Actually, it’s just some guy that shares our last name but who’s counting?

Looking out a second floor window you can see the ski-jumps and bobsled course off in the distance. Right next to the arena is the outdoor speed skating rink used in the 1932 and 1980 Olympics. We decided to go there next.

On our way out of the building we stumbled upon the rink used in 1932. Apparently they are having the Lake Placid ice skating championships this week and are using the 1932 rink.

With tomorrow’s forecast even worse than today’s, we decided to fit in one more activity for the day. The Mt. Van Hoevenberg Olympic Bobsled Run.

We chose the guided bus tour, which was only $18 for our family. We were glad we did because we learned so much about the history of the Lake Placid Olympics from the bus driver. Here are some fun facts about the bobsled track:

Here are some facts about other aspects of the Olympics he shared with us:

The final part of the tour allowed us to walk down the actual bobsled track from the half-mile point. It was such a neat experience.

Here’s a video of part of the walk: Walk down bobsled track

We came back to a waterlogged campsite and settled in for a long, wet night.

Well, it rained….all through the night. It wasn’t a torrential downpour but definitely a good soaking rain. I use the term “good” very loosely in this context.

Our tent held up well with only a few minor leaks at the seams. Part of our water problem was our fault because we didn’t tuck in the edges of the tarps underneath our tent. That allowed excess water to pool up between the tarps and our tent.

We survived the night and headed back to Lake Placid for another day of adventuring.

First up, was a tour of the Lake Placid ski jumping facilities. The tour was $11 per adult (the kids were free again!!!) and included an elevator ride to the top of the tallest ski jump.

Major props to Shannon, who conquered her fear of heights and successfully rode the chairlift up and down the mountain. We’ll just leave out the part at the end, where she told me she would never speak to me again. 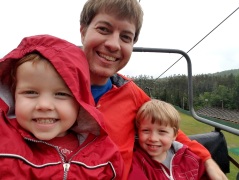 Here’s a view of the jumping platforms from the lodge. 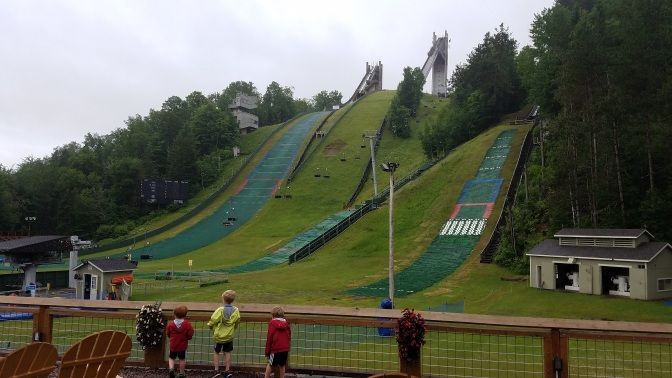 I thought after riding the chairlift to the base of the platform it wouldn’t look as impressive. Boy was I wrong.

After riding the elevator to the top and seeing what the athletes see just before they take off, my suspicions were confirmed. These athletes are not in the same reality as me. I mean, look at this:

During times when they aren’t hosting events and no one is training, you can tube down the landing portion of the jump. The guys working there said you can reach speeds of 55 to 60 miles per hour.

It just so happened someone was tubing down the slope at the same time we were riding the chairlift back down to the lodge.

They also have a freestyle training center where the athletes jump off the ramps and land in a 17 foot deep swimming pool.

After finishing up at the ski jump facility we ate a picnic lunch in the upper parking lot while watching the Lake Placid Horse Show being held across the street.

Once lunch was done, we drove back to the main street area of Lake Placid and visited a few more of the shops we didn’t get to yesterday. There were ice skaters and equestrian people (not really sure what they are called) everywhere!

We headed back to the campsite for the night, hoping for no more rain and dreading pack up time in the morning.

We thoroughly enjoyed our time in the Lake Placid area and will take many memories with us!

Until the next adventure!