With temperatures climbing into the mid 90’s, we started wondering if we were back home in Virginia. Alas, it was just a sweltering heat wave engulfing much of the country.

I don’t mind warm weather. However, I don’t care to be tent camping during a heat wave, but that’s where we find ourselves.

This morning we got to pack up a soggy campsite once again. We are pretty much over the whole “drying stuff off before packing it up” routine.

We made the three and a half hour drive from Macomb to Westcott Beach State Park. Our site was pretty much completely in the sun when we arrived. We set up our tent and headed for the beach area so the boys could put their feet in Lake Ontario.

The boys have now seen all five of the Great Lakes. Check that one off the bucket list!! 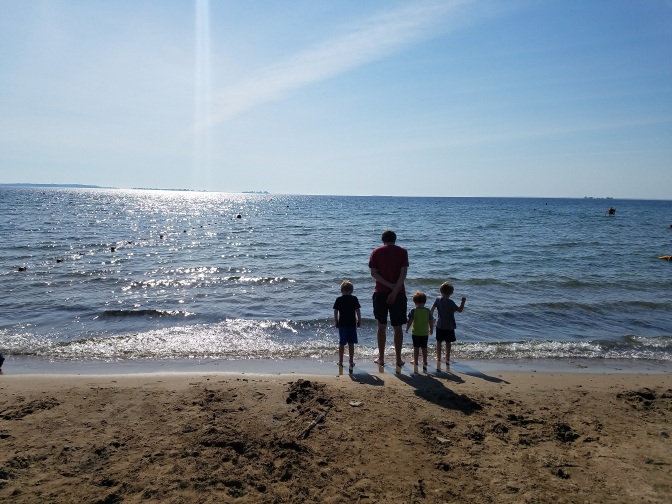 After a quick trip into Watertown to purchase a couple fans, we ate a late dinner at the campsite and called it a night.

We started off our day with a trip back into Watertown to do a load of laundry and to get the oil changed in the van. We have driven a little over 5,000 miles so far on this trip.

With temperatures quickly climbing into the mid 90’s, napping in the tent just isn’t an option. We drove around in the car to get the boys’ naps in for the day. Once naps were done, it was time for some Lake Ontario fun. It was hot, but the boys had a blast swimming and building a river that connected to lake. I kind of got into the playing in the sand part as well. 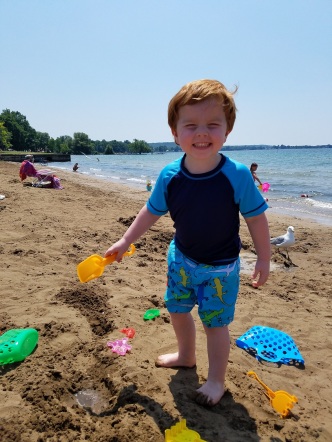 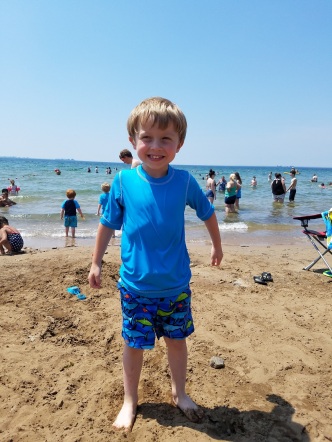 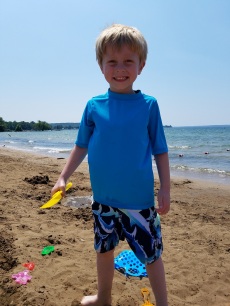 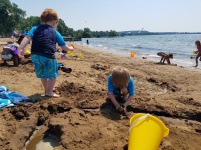 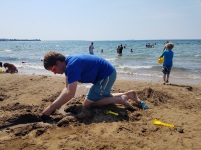 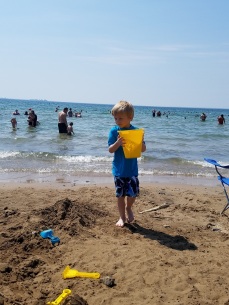 We had more sightseeing planned for the area but the heat was too intense for us. We were able to have dinner outside, back near the beach area. Our campsite gets full sun in the evenings.

After dinner and some frisbee time, we went back to our campsite, organized our belongings in the tent and the van, got the boys showered and collapsed in our beds for the night.

Random statement for the day: There are seagulls everywhere and they are not scared. If you step away from the picnic table while eating lunch, a seagull will swoop in and try to steal it from you. They are tenacious!!!

Today we set an all time record for the earliest we have ever checked out of a campsite.

This was thanks in large part to all the work and organizing we did last night. It was also possible because our stuff wasn’t wet. We had forgotten what it was like to be able to break down the tent and pack it up right away. The same goes for the tarps.

Our first stop today was Chimney Bluffs State Park. It was an hour and 45 minute drive from Westcott Beach. Most of our drive hugged the shoreline of Lake Ontario which gave us a nice view every now and then.

By the time we made it Chimney Bluffs, temperatures were already in the 90’s. Our goal was to see the best the park had to offer while exerting the least amount of effort possible.

I had read some reviews that recommended not using the park’s main entrance because you had to pay to park and it was a longer walk to see the bluffs. There was another spot near the back of the park, where parking was free and the walk was not as strenuous. Sign us up for that!!

We were glad we were there earlier in the day because the bluffs provided some shade from the sun. The bluffs overlooking the lake were beautiful and the boys enjoyed throwing rocks into the lake. 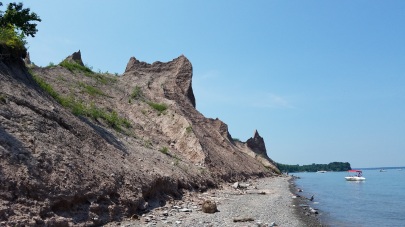 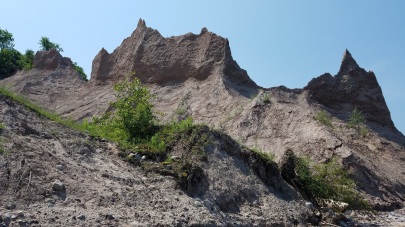 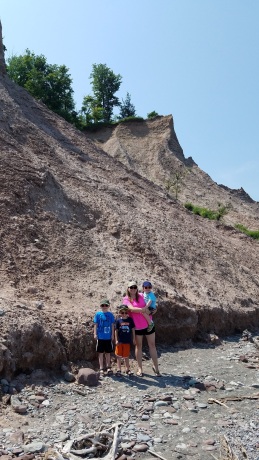 The boys were also able to choose a small rock as a keepsake from Lake Ontario to go with their collection of rocks from the other Great Lakes.

It was another hour and a half drive to our campsite at Watkins Glen State Park. The last half of the drive was right beside Seneca Lake, the largest of the Finger Lakes.

Watkins Glen offers many great trails, highlighted by the Gorge Trail, which we plan to do first thing tomorrow morning. When we arrived, the trail and pool area of the park were incredibly busy. Thankfully the campground was located in a different section.

Our ideal campground is one where the sites are separated and have good privacy. That’s exactly what Watkins Glen offered. We were pleased that our site had full shade, with just a few stray sunrays finding their way through the trees.

Even in the shade, just hanging out at the campground wasn’t an option. We drove back into the town of Watkins Glen and ate dinner at Subway. Our two most common eating out choices during this trip have been Subway and McDonalds. They are both, literally, everywhere.

After dinner, it was back to the campsite for a long, sticky night.

We are excited to explore Watkins Glen State Park tomorrow!

Here’s a quick update on our license plate hunt. Since the last time we posted about this, we have seen Alaska and Oregon. We’re now down to five. 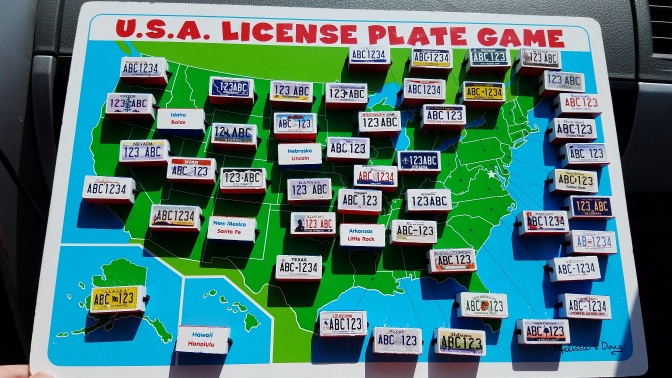